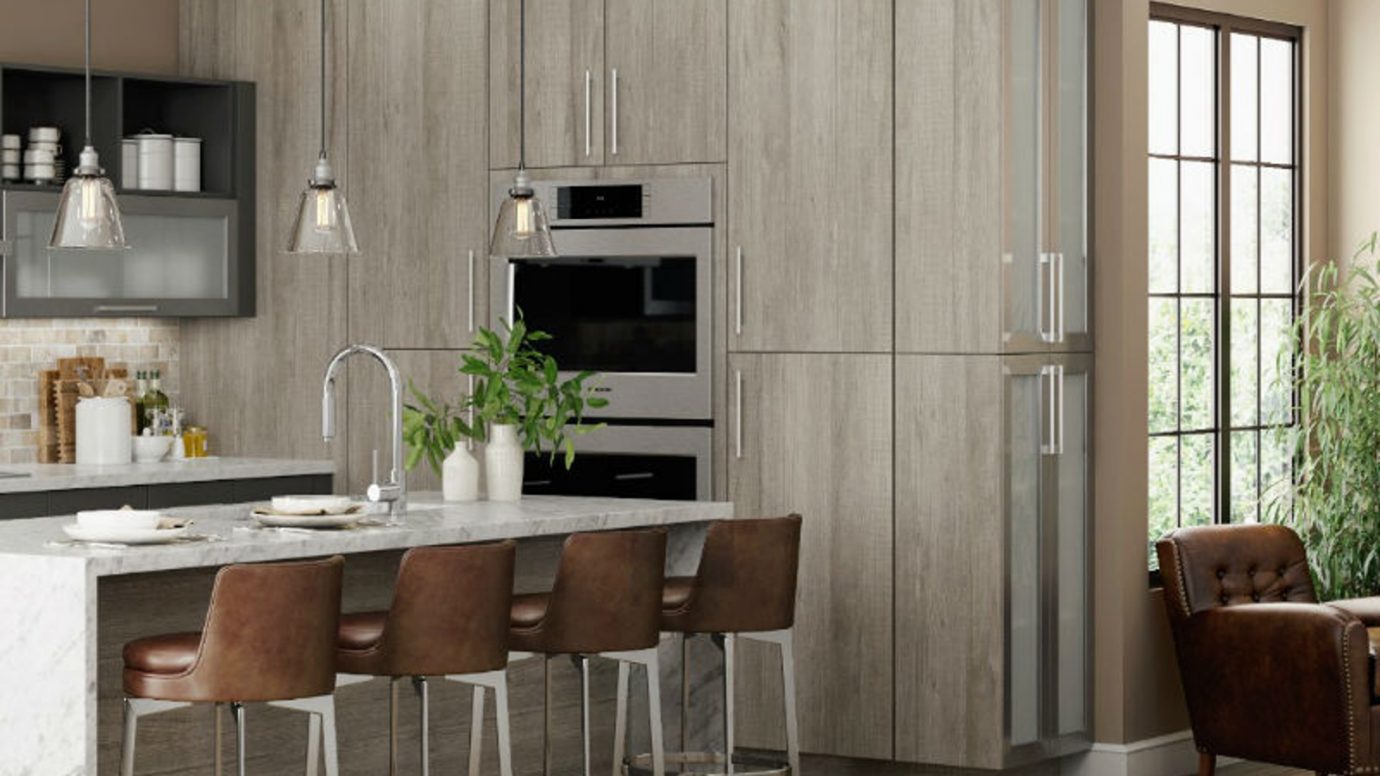 The Cabinets of the Desert design team would like to share long-established kitchen design standards with our cabinetry clients. We can flexibly apply these standards to enhance the design of a modern kitchen for you. These standards also inform the selection and layout of your kitchen cabinetry.

In 1944 the University of Illinois conducted several studies on kitchen design and developed design principles still in use today. Although Universal Design goes beyond the Illinois guidelines, they remain the gold standard.

Since the Illinois Rules came into being, lifestyles have changed. For example, there is now likely to be more than one person active in food preparation. Also, the kitchen has become even more of a gathering place. This change has made the kitchen island a popular feature in a kitchen remodel project since it can provide additional work triangles and a seating area.

The Illinois principles speak more to functionality than aesthetics. So let’s address some preliminary points:

Guideline: The clear opening of a doorway should be at least 32″ wide-requiring a minimum 34″ door.

Guideline: In a kitchen with three work centers, the sum of the three traveled distances should total no more than 26′, with no single leg of the triangle measuring less than 4 feet nor more than 9 feet.

Guideline: A full-height, full-depth, tall obstacle should not separate two primary work centers. A properly recessed tall corner unit will not interrupt the workflow and is acceptable. (Examples of a full-height obstacle are a tall oven cabinet, tall pantry cabinet, or refrigerator)

Guideline: No major traffic patterns should cross through the basic work triangle.

Guideline: The width of a work aisle should be at least 42″ for one cook and at least 48″ for multiple cooks, measured between the counter frontage, tall cabinets and/or appliances.

Guideline: The width of a walkway should be at least 36″.

Guideline: In a seating area where no traffic passes behind a seated diner, allow 32″ of clearance from the counter/table edge to any wall or other obstruction behind the seating area.

Guideline: Kitchen seating should be a minimum of 24″ wide for each person. Other important measurements:

Guideline: If a kitchen has only one sink, locate it adjacent to or across from the cooking surface and refrigerator.

Guideline: Include a section of continuous countertop at least 30″ wide x 24″ deep immediately next to a sink for a primary preparation/work area.

Guideline: Include at least two waste receptacles. Locate one near each clean-up/prep sink(s) and a second for recycling either in the kitchen or nearby.

Guideline: Include at least:

Guideline: Include a minimum of 12″ of landing area on one side of a cooking surface and 15″ on the other side.

Guideline: Allow 24″ of clearance between the cooking surface and a protected non-combustible surface above it.

A fire extinguisher should be located near the exit of the kitchen.

Guideline: Provide at least a 15″ landing area above, below, or adjacent to the handle side of a microwave oven.

Guideline: If two landing areas are adjacent, determine a new minimum for the two adjoining spaces by taking the larger of the two landing area requirements and adding 12″.

Guideline: A total of 158″ of countertop frontage, 24″ deep, with at least 15″ of clearance above, is needed to accommodate all uses, including the landing area, preparation/work area, and storage.

Guideline: Specify clipped or round corners rather than pointed corners on all countertops.

The total shelf/drawer frontage is:

Guideline: Of the total recommended wall, base, drawer, and pantry shelf/drawer frontage, the following should be located within 72″ of the centerline of the main clean-up/prep sink:

Guideline: At least one corner cabinet should include a functional storage device.

Guideline: GFCI (Ground-Fault Circuit-Interrupter) protection is required on all receptacles servicing countertop surfaces within the kitchen.

Guideline: In addition to the general lighting required by code, every work surface should be well illuminated by appropriate task lighting.

The Illinois Rules guide the functionality of the kitchen and its basic form. Once basic functionality is covered, it is time to add your own style to your kitchen remodel. Are you interested in the steps needed to plan your project? Read our Kitchen Remodeling Steps blog. Ready to pick out your cabinets? Read Buying Kitchen Cabinets. Prefer to start with a comprehensive look at how you want to use your new kitchen? Please refer to our Kitchen Checklist.